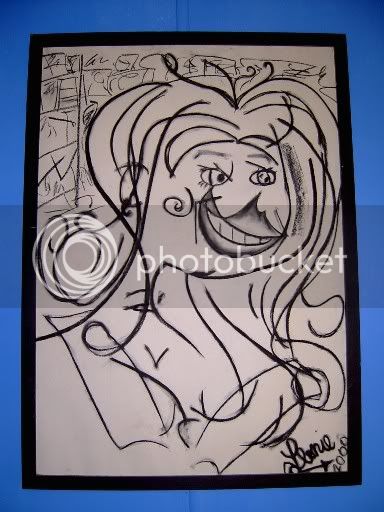 Self Portrait of me as a 17yo

It has come into full use of late… I have photocopied articles from it, and typed out sections for friends who are going through rough times and need reminders of just what life is all about…

I have been inspired by a beautiful person to shine a spotlight into my dark places, be honest about them, and love myself as a whole person.

The good parts of myself are not the whole me. The whole me is filled with good parts, and dark parts that I try to keep concealed… parts that make me feel if everyone knew about them, I would not be as loveable.

So I have started on a path of full self love… acceptance for not only the parts that I cherish… but the bits of me I dislike as well.

I remember an incident well over a decade ago that changed my destiny. Leading up to this event, I had been going through emotional upheaval due to the break-up of a relationship. For a while I had become quite reclusive, rarely answering the phone, hiding in a dark house and shakily swinging between panic and a feeling that I would survive.

I did survive, and eventually I started seeing a man that I really liked. Slowly, steadily we grew to care for each other. But there was something coming between us. I knew that he hadn’t seen all facets of me. There was a “dirty little secret” that he didn’t know. Because of his sophistication, life experience and self-confidence, I felt that when he found out my “dirty little secret” he wouldn’t want to see me any more. We’d go out for dinner, and when we’d get home I was always aware that the secret was in the house.

One day I summoned all my courage. “There’s something I have to show you,” I said, taking by the hand into my bedroom. “It’s something I’m really ashamed of.” There at the top of my cupboard was a large box. We pulled it down. “It’s my coffin box,” I said, referring to the sheer size of it and to its rectangular shape. Intrigued by the box and my sombre mood, he knelt down, probably expecting to see a dead body. It was worse than that. Inside were piles of unopened letters. Tears welled up in my eyes.

“Over the past months I have been very depressed and disorganised. I haven’t been able to cope with people. I stopped opening my mail for a few weeks because life became overwhelming. Then I just couldn’t open it because I felt so afraid that there were people I should have answered and had let down, and bills that should have been paid. And then I knew the new letters coming would be questioning whether I got the old letters, so I didn’t open them either and…”

“And from the state of the box, it just kept getting worse.”

“Yes. It’s been so long, I’m too frightened to start. And it haunts me every day. I’m really embarrassed that things got to this,” I said, revealing my vulnerability to this man, allowing myself to fall off my pedestal. Even before I saw his reaction, I began feeling lighter, better, for having exposed my humanness. In Jungian terms it is called our shadow side, the side of us that lives in the dark underbelly of our being. Or in my case in a literal closet.

We all have shadow sides, and it’s exhausting for us all to carry around our frailties, shames, flaws and angry demons, and to pretend that we are other than what we are. I’ve seen it all my life – people performing, adopting a fabulous persona, but inside feeling fragile or wild or enraged, and living in fear of being exposed as a fraud.

When I finally could look up, he was smiling. “That’s okay. I have a “dirty little secret” too.” This man whom I so admired told me how he was recently asked to address a prominent group of business leaders at a conference He stood up on the podium, seat by Armani, slightly greying temples, intelligent, respected, articulate, and as he opened his mouth to speak nothing came out. Overwhelmed with terror, he staggered to the side of the podium and fainted. “We’re not all that we seem,” he said, smiling.

Which is true enough. I was thinking of this story because recently I’ve had the chance to meet several people who, on closer inspection, are far more vulnerable than they appear. One, a magnificent-looking woman who confessed to me that she really hated her body, then was riddled with guilt for not appreciating herself. Like so many women, she’d been conditioned to denounce her own Black Madonna symbol of female sexual potency, and had split off from her own erotic soul, hiding it in her version of my coffin box. A prominent doctor revealed to me behaviour that was so eccentric, I could see he was the mythological “wounded healer” who, because of his own pain and flawed personality, was able to help other suffering souls.

Our vulnerabilities and shadow sides are like sand to oyster: they help us create the pearls of our being. We should honour them, accept them, and reveal them so others can feel relieved about their own imperfections. When we share our “dirty little secrets: – that we can’t always cope or we hate ourselves, that we are addictive, or secretly play doctors ‘n’ nurses, binge on chocolate or still take teddy to bed – we move beyond our individual plight to a deeper understanding of the human condition, which fosters empathy and compassion towards others and ourselves.

Our pains and foibles define us. We are most beautiful when we allow ourselves to be fully seen in both our wonderful power and our dark imperfection. And we are more interesting for the things we keep hidden in the coffin boxes of our psyche. Over the next few days, my new boyfriend and I sat together and opened each letter. The ones that made me feel worst were the readers’ letters praising me. “If only they knew the truth,” I kept mumbling. “If you weren’t the sort of woman who felt deeply and who occasionally messed up, you wouldn’t write as you do,” he reassured me.

That weekend, seen and accepted in my truth, I made a decision of a lifetime: not only to accept myself but to fully accept the love of someone who fully accepted me. We were married a short while later.