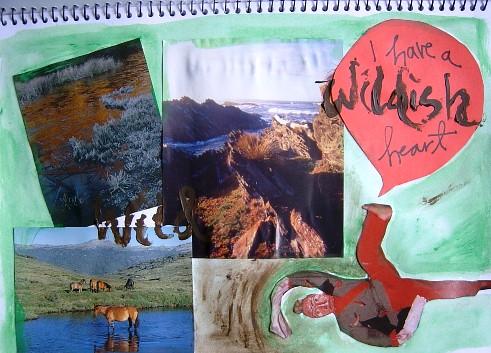 “And La Loba sings more and the wolf creature begins to breathe.

And still La Loba sings so deeply that the floor of the desert shakes, and as she sings, the wolf opens its eyes, leaps up, and runs away down the canyon.

Somewhere in its running, whether by the speed of its running, or by splashing its way into the river, or by way of a ray of sunlight or moonlight hitting it right in the side, the wolf is suddenly transformed into a laughing woman who runs free toward the horizon.”

~ Clarissa Pinkola Estes, “Women who run with the wolves“

This book awakens me, enlivens me, leaves me breathless in the knowing that surges. It holds a light to my cells until I see that I am blazing and wise, from the microscopic parts of me, to the magnificent.

I grow my hair so it falls tangled down my back, and each night when I read this book I dream wildly and whimsically. Last night I held newspaper and incense sticks in my arms, my baby gone in the tsunami. I have drifted into dark places and played groundhog day until I could fathom the courage to face what I feared. I have circled with women in the deepness of the night, still learning my lessons even as I sleep. And I have heard the call of the goddess so loudly I have awoken to find myself bleeding.

This is not the undertaking of the book alone. It is the sum of all my life melding into a spiritual tapestry. It is the countless goddesses and gods that surround me. It is the awakening of the creative snake within me that reinvents, relives and recreates. It is being mindful and meditative. It is the thrill of being truthful about what I want and who I am. It is the discovery of myself, molecule by molecule, story by story, dream by dream, moment by moment.

“If the eye of the heart is open, in each atom there will be one hundred secrets.”
~ Attar