I’ve been craving circles of women who have experienced birthing, wanting to hear their sacred stories. I’m so grateful & blessed that mamas from around the globe have agreed to speak their stories to me, and to us… I want to weave a woven wicker basket of mama’s birthing stories for us all to hear in our hearts.

Today’s birth story is gifted to us from the gorgeous Goddess Nona. Nona is a mama to Clara, a Martha Beck trained coach, Kripalu yoga teacher, writer, speaker and health and happiness coach. Visit her website at Insight Health Coaching. Today, she is sharing her beautiful homebirth story.

Clara Grace is born at home

My husband was deployed my entire third trimester and we weren’t sure he would be able to come home for the birth of our daughter. We had lined up back-to-back visitors/helpers for me, just in case, but the good news was, he was granted a 7-day window he could come home. I told him the dates, assuming Clara would arrive on time.

Why did I think that?

The end of his visit home and Clara had still not shown any sign of arriving. He called back to his duty station and they gave him an extra three days, and then he had to go back. We had just taken one of our visitors to the airport and my parents were arriving the next afternoon. We were pretty bummed out and had started talking with our midwife about storming the hospital and asking for an induction so Erick was sure to be at the birth. It was Thursday night and our midwife, Dotti, came by the house, stripped my membranes for the 3rd time that week and said if Clara wasn’t born by Saturday, we would all go to the hospital. We had Indian food made by a neighbor and went to bed. Erick was really tired and said he hoped Clara waited at least one more day so he could get a good night of sleep. I was totally incredulous and told him to bite his tongue.

I was so ready for Clara to come!!!

About two hours after we went to bed, I started feeling regular contractions. I quietly got out of bed, grabbed the clock with the second hand and went to sit on the guest room toilet (I know, very romantic). I was timing the contractions at a solid 2 minutes apart.

With every contraction I would breath deeply and relax my pevis muscles, imagining my cervix opening.

After about 2 hours of laboring and timing my contractions, I woke Erick up to tell him Clara was on her way!! My contractions were about a minute apart.

Erick hopped up to call Dotti, who asked a lot of questions about the labor and then she agreed to come on over with all her equipment and her assistant. They arrived a while later, timed some contractions while I sat on the birth ball and then she checked to see how far along I was. I remember really hoping that I wasn’t imagining the contractions…. I was relieved when she told me I was 4 cm dialated!! Woo Hoo!! 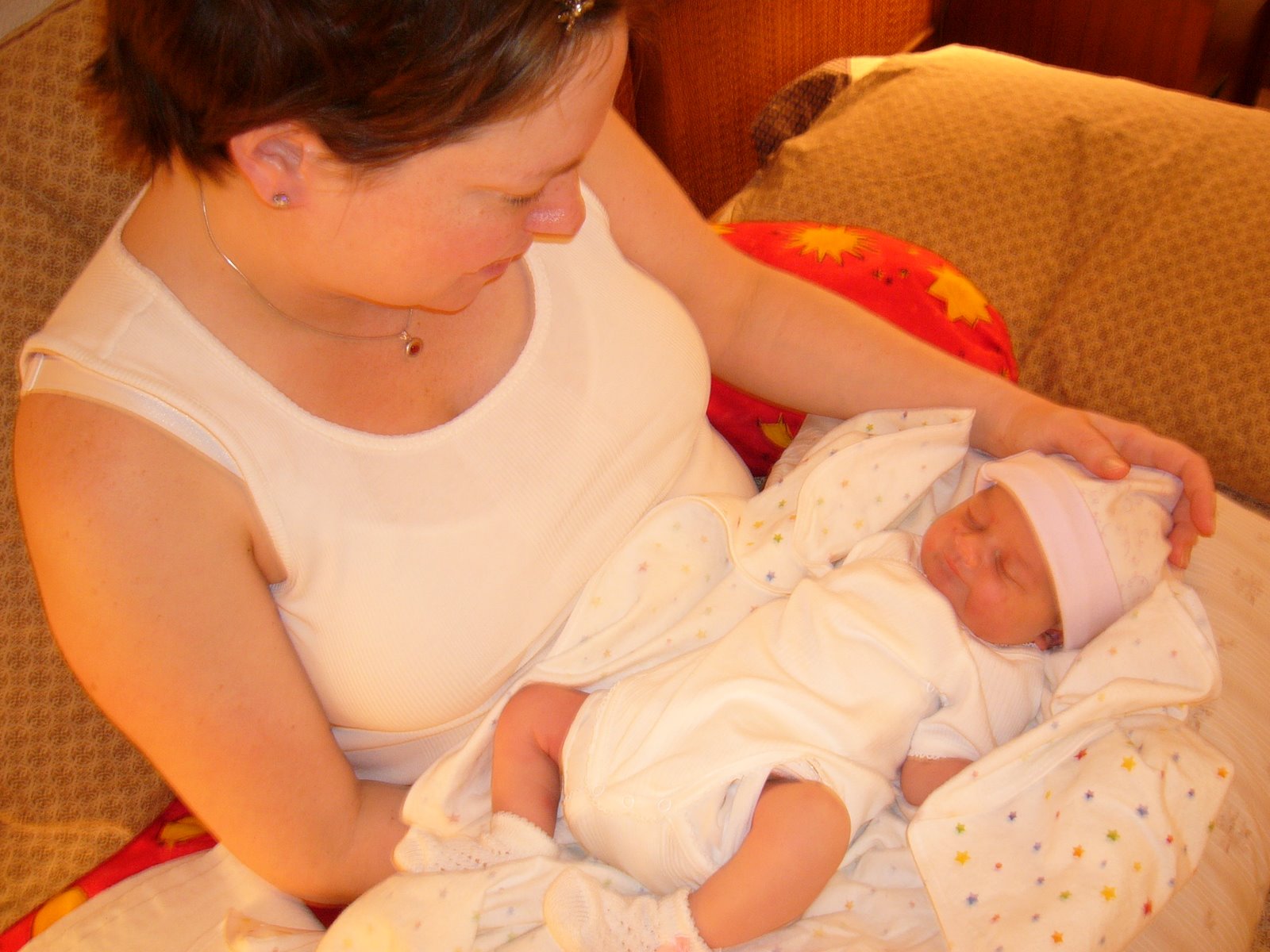 She and her assistant went downstairs to get some rest and advised us to do the same. Dotti guesstimated that I would be in labor all night. So, Erick and I laid down to rest and I slept between contractions.

Every contraction, I would wake up and breathe very deeply and chant in a low voice, “open”, and imagine my cervix opening. It was really very peaceful and it was so nice to have Erick next to me sleeping and to be curled up with my body pillow behind him.

At around 5 am, my contractions got really, really strong and I remember thinking, “If this isn’t transition, I’m in big trouble, because I’m gonna want drugs…” Dotti and the assistant (I wish I remembered her name because she was just wonderful and was absolutely critical to my comfort during the birth!) rushed up to check me because I was sounding a lot more intense! Well, when they checked, I was fully dialated and, as she was finishing up the check, my water broke! I couldn’t believe the amount of fluid!!!

It had been 8 hours since my contractions had started and I remember thinking, “I’m going to meet Clara within the next two hours!!” I was so excited and everyone helped me over to the birth tub in Clara’s room… and then the real fun began.

I honestly don’t have a lot of memory of the pushing phase of the birth. I remember the tub really not working for me and being sort of uncomfortable but being hell-bent on a water birth. The water felt good, but it just wasn’t really good for pushing for whatever reason. I know that after a while, Dotti checked me again, and a cervical lip had shown up and I remember her holding the cervix aside while I pushed past it.

I know that happened 3 times, at least.

I labored on the bed (which I hated), I labored standing up, I labored in the pool, I walked around, sat down, got on all fours… but the place that was really good for me, that I kept returning to again and again was the birthing stool they had brought with them (which I had, for whatever reason, thought was not going to be for me).

I remember a backup midwife showing up and some point and sort of taking charge. I think Dotti was a little perplexed and worried about my progress, although Clara’s vitals were fine. I leaned heavily on the assistant to get me through contractions. I remember Erick disappearing to go do laundry, because when he worries, he cleans. I remember everyone trying to get me to eat and wanting to smack them.

The things I remember most clearly are that when I was having contractions after my water broke, it was a lot more intense and if Erick was supporting me during contractions and he moved a muscle, I would yell at him (okay, that only happened twice). Poor guy. I know I had two more gushes of water after the initial water breaking, so there was a lot of puddle clean-up going on. And finally, at the end, in the loft of our house, on the birthing stool, I saw my reflection in the mirror while I was pushing and I thought, “I hope Erick isn’t looking at my reflection because no matter what anyone says, this is NOT my most beautiful moment!”

But then I reached down and felt Clara’s head crowning and everything else just dissapeared. It was my baby!!

In the end, Dotti had to reach up and pull Clara out of the birth canal. Her arm was across her body and her hand was against the opposite cheek, so the width I was pushing was, well, wide. That’s what was causing the difficulty. I pushed for five hours, after eight hours of labor, for a 13-hour birth.

When Clara emerged at 9:50 on December 10th, she didn’t cry. At 21 inches and 7 pounds, 11 ounces, she was long and thin and obviously resembled Erick, so she was gorgeous right off the bat!

But it was amazing how she just laid peacefully in my arms looking at Erick and I. Erick cut the cord two hours after the birth and as soon as she started rooting around, I nursed her. She didn’t have to leave the comfort of our bed for a week. The experience of having our daughter at home, the blessing of my husband being there, the supportive team that was there to usher Clara into the world… all of these things are priceless and truly beyond words.

Thank you so much, sweet Goddess Nona for sharing your story of bravery, courage, faith and love in birthing… it is such a blessing to witness, and hear.